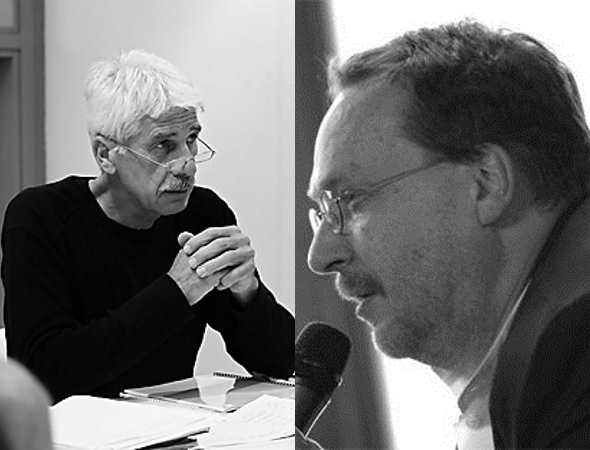 In 2011, two German design experts visited a preliminary presentation of Torsten Bröhan’s Hangzhou design collection, which is officially referred to as the “Bauhaus collection” in the Chinese public even though many of the exhibits do not have anything to do with the traditional Bauhaus movement. The opinions of the two professors are very different.

We spoke to Prof. Michael Erlhoff, founder and former director of the Cologne International School of Design, and Prof. Egon Chemaitis, Professor for Design at Berlin University of the Arts (UDK Berlin) until 2011 and, since 2007, professor of the Master’s course at the CdK (Chinese-German Academy of Art) in Hangzhou, a collaborative project by the CAA and UDK Berlin that was launched in 2006 and ends in 2015.

The two conversations took place at different locations in spring 2015. Here we contrast the different viewpoints on our questions.

What do you think is the significance of the “Bauhaus collection” in Hangzhou?

Michael Erlhoff: I think the Hangzhou municipal government was a bit naive in making this purchase. For example, I can’t help wondering what Olivetti posters from the 1950s are doing in this collection. They may be pretty, but what do they have to do with the Bauhaus?

Egon Chemaitis: In my opinion, the exhibits currently on display are very useful for learning and teaching purposes. Perhaps it is even a great blessing that it is not exclusively a Bauhaus collection.

Michael Erlhoff: Only some of the items purchased, around 150 pieces. For example, there was one of the kettles by Peter Behrens, a Rietveld chair, a bit of Bauhaus graphic design, and so on. And minor errors with regard to attribution and presentation, which I already referred to in my article for the design magazine Stylepark.

Egon Chemaitis: Around 140 to 150 exhibits were on display – mainly seating furniture and tableware (porcelain, silverware, service sets) and smaller lamps. But I’m not entirely sure any more. The exhibits ranged from the end of the nineteenth century to well into the twentieth century, with porcelain by Gropius, pieces by Wagenfeld, and a service set by Gerhard Marcks that I had never come across before. There were also lots of chairs, but no upholstery. For example, the famous red-and-yellow chair and the zig-zag chair by Rietveld. There was also work by Josef Hoffmann, Wiener Werkstätten. Everything was presented very nicely on pedestals and was lit slightly from below. This was pleasant for approaching the exhibits for the purposes of study, as I did with the Master’s students there. As regards the errors in the presentation, they were oversights that I don’t think are all that bad.

What might the purpose of the collection purchase have been?

Michael Erlhoff: Maybe the competition with Korea, where apparently there was also interest in the Bröhan collection. That may have driven up the price. In China there is immense interest in German design and German architecture. And design in general is seen as an important growth factor for the economy. I would estimate that around 350 design academies have opened in China over the past 15 years.

Egon Chemaitis: The goal for educating designers in China needs to be to understand the principle of modernism: the focus here is on the function, as well as a formal use of forms that is based on geometry and accommodates any manufacturing technique. It would be interesting to see whether China could successfully use this to arrive at its own design philosophy. Modernist design is something that can be seized upon by the Chinese design community – as the beginning of modern design. Later periods such as post-modernism would be more difficult to convey without knowing the historical context. This was a US reaction to modernism as an imported culture. The Chinese need to look at that first. They didn’t go through a modernist period.

How did the rather audacious attribution “Bauhaus collection” come to be used by the Chinese press and even CAA President Xu Jiang himself?

Michael Erlhoff: The CAA is China’s oldest art college. And Hangzhou is rich, but as a location it needs to raise its status in relation to Beijing and Shanghai, which is only an hour away by express train. Furthermore, the Academy President Jiang Xu, who studied Art in Hamburg, is a nephew of the former President of China Jiang Zemin. This Xu is a highly prestige-conscious person who celebrates the topic of design in a very grandiose way. There is vain competition between the cities for influence and money. German design is incredibly highly regarded in China and the term “Bauhaus” is a synonym for it. That is probably how the “Bauhaus” label came to be used by some people and by the media when this collection was bought for a large sum of money.

Egon Chemaitis: In China, Bauhaus is code for modern design. It is about an image, not a specific attribution. The criticism of the name “Bauhaus collection” comes from a western perspective.

Michael Erlhoff: I found the items in the exhibition boring.

Egon Chemaitis: A reasonable presentation for an interim solution. In view of the items on display, I had the impression that the collection gets thinner the more it moves into the modern period (1950s to 1970s). The selection seemed rather arbitrary to me. For example, the Alessi Sapper kettle seems rather isolated, and post-modernism is not documented.