Home / The Collection / China desperately needs designers. A teakettle is supposed to be the solution 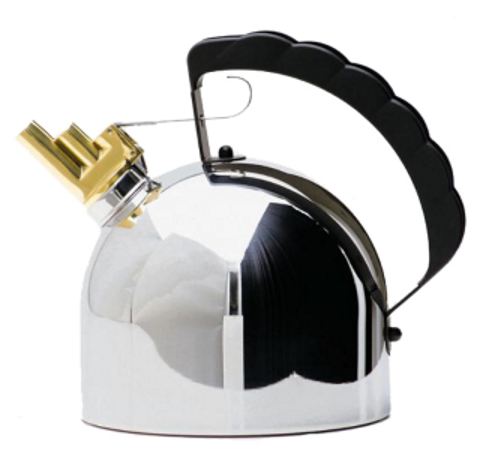 A beautiful teakettle from the Bröhan Collection for Huangzhou, which was confused with something from the Bauhaus era, stands as the symbol of China’s creativity policy – the country needs new designers!

By buying the design collection of the German art dealer Torsten Bröhan (including Alessi kettle), the renowned China Academy of Art apparently bought itself out from under some unpleasant pressure – the Chinese economy’s demand for product designers.

The alleged Bauhaus teakettle has an untold number of fans around the world: This is the Alessis Melodic Kettle 9091, designed by the German designer Richard Sapper, who was born in Munich in 1932. The peculiarity about this piece (aside from the unusual design): its pipe sound is melodic.

As the German design expert Michael Erlhoff remarks smugly in an in-depth text contribution in the digital architecture and design magazine Stylepark, this Alessi teakettle in Bröhan’s Bauhaus Collection represents a number of misunderstandings in connection with the megadeal between the city of Hangzhou and Torsten Bröhan.

In the fall of 2011, Bröhan sold a design collection comprising 7,010 pieces to China, which since then has been celebrated as “Bauhaus Collection” in Chinese media. If it really is that – there are doubts about that.

For what Erlhoff got to see at a presentation of highlights from that collection in 2011, were originals or remakes from designers or architects respectively, which definitely could not be attributed to Bauhaus – such as the Dutch architect and designer Gerrit Rietveld, Josef Hoffmann of the “Wiener Werkstätten” as well as Peter Behrens, the all-rounder who primarily worked in Düsseldorf and Berlin.

And this is what Erlhoff writes in his article:

„Incidentally this collection contains, among other things, a number of strange – and plausible – misunderstandings. First of all – simply because the collection was bought like this, as a job lot, and has been exhibited accordingly – it contains not only Bauhaus material but also objects (unfortunately some of them not originals) by Gerrit Rietveld, Josef Hoffmann and Peter Behrens and as well as by Olivetti and others. A more tragic aspect, however, is a number of mistakes in ascriptions of provenience and in terms of understanding. For example: at the exhibition, the lid of the teapot from the famous crockery set designed by Walter Gropius for Rosenthal is the wrong way around, meaning that its real purpose, to be held in place by the thumb when pouring out the tea, is entirely neglected and inverted. But worse than this, one glass case contains a number of kettles and bears the date „1932“. It shows the kettle designed by Richard Sapper for Alessi. 1932 is not the date when the kettle was designed but the year of the designer’s birth.“

In 2011, Erlhoff took a close look at parts of the collection in Hangzhou when selected pieces were displayed to the public at an exhibition. And developed an interesting theory:

By all appearances, the Bröhan Collection was bought quickly and declared as a Bauhaus collection by Chinese officials, in order to serve a political purpose that usually – and not only in China – obeys economic pressures. The growing consumer goods industry of this giant country desperately needs people who can give their products acceptable shapes. Very desperately actually! 65,000 students apply to the Hangzhou Academy of Art every year, wrote Erlhoff. However, there are only 1,000 study places available there. This creates quite a lot of pressure.

A statement by Chen Zhenlian deputy director of the Standing Committee of Hangzhou People’s Congress, confirms the race with time: „As Hangzhou is dedicated to making itself a ‚creative city, it needs a first-class international art brand as a platform to communicate with other international cities.“

Our summary of the Erlhoff article for Stylepark?

With the purchase of Torsten Bröhan’s collection, the regional government communicated the following: We’re doing something! It is quite possible that in the rush nobody really took much notice of what the German Mr Bröhan had palmed off on his business partner.

Did the gentlemen in Hangzhou’s city government purchase an education political PR package worth many millions of Euros and attach a “Bauhaus” label to it, in order to free themselves from great pressure?